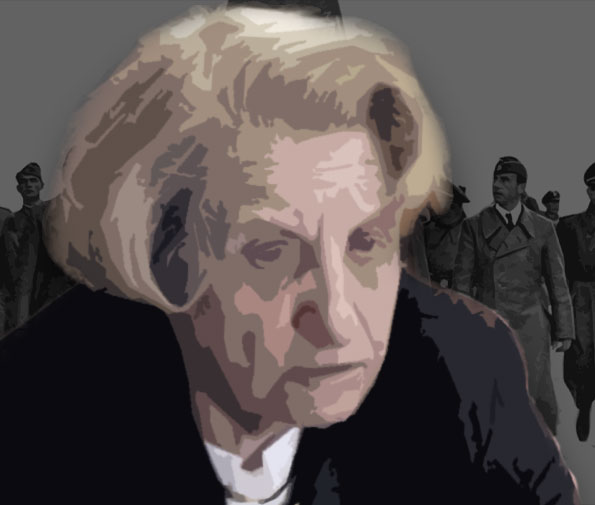 In 2013, Holocaust Survivor Kitty Werthmann described the step-by-step process of how, in 1938, an independent Austria relinquished its sovereignty voluntarily to the socialist ideals of Adolph Hitler. In 2013, Ms. Werthmann, then a state lobbyist in the South Dakota state legislature, stated that the same warning signs that existed in Europe before WW2 are raising their ugly heads in America.  https://www.instagram.com/tv/CKQBPkdAXJJ/?igshid=ru2c8wcmrjg7

The following is a summary of part of her amazing presentation and the similarities:

In 1938, Austria was in a deep depression with 38% unemployment. There were riots in the streets and entire blocks were being burnt down by political dissidents. The controlled media at the time was touting that Hitler’s Germany had full employment and no political problems. At the next election cycle, 98% of Austria decided to follow Hitler’s leadership called “National Socialism.”

.▪ Within 6 months of Hitler’s takeover, he suspended ALL elections of any kind in Austria resorting to only “appointed” government officials

The Real ID Act (2020) is a government surveillance biometric tool under the guise of better security. It will lead to a slippery slope of government monitoring of citizens. https://www.aclu.org/other/5-problems-national-id-cards             https://americanpolicy.org/2020/03/11/real-id-act-the-death-of-our-liberty/

▪ No one was permitted to question government actions. Those that did lost all their rights.

▪ Hitler gave free radios to the population, but nationalized all transmissions to espouse only Hitler’s agenda and speeches

▪ All newspapers were censored by Hitler

▪ Hitler instituted Equal Rights for everyone and a guaranteed income

▪ Equal rights meant equality of wealth, by raising taxes by 70%

▪ Free childcare for everyone, taught by young skilled child psychologist women, who were charged with molding the youth without parental guidance

▪ Education was nationalized. There were no more prayers with folded hands but instead children were taught to greet each other with the “Heil Hitler” salute.

▪ School children were taught not to listen to their parents; the government knows best.

Today, the U.S. education system is more concerned with diversity, equality, and inclusivity, to the exclusion of possible “conservative” parental values. https://www.hillbrook.org/a-hillbrook-education/diversity-equity-and-inclusion-education  Family values are being replaced by government teaching, as it was during Hitler’s rule. https://patriotpost.us/articles/72658-leftist-teacher-worries-about-parents-listening-in-on-virtual-classes-2020-08-12

Hitler’s “Brownshirts” are today’s organized Antifa-style protesters, who disrupt our democratic republic by organizing street riots, smashing windows, blocking traffic, setting fires, vandalizing, and even beating to death innocent bystanders to spread fear and panic. The objective is the same and is just as effective. https://grandmageri422.me/2020/06/23/hitlers-brownshirts-and-antifa-similarities-are-astounding/

▪ Healthcare was nationalized and turned the system into a “conveyor belt” type coverage where only minimum care was offered. Doctors were salaried by the socialist government. No free-market opportunities allowed

The Affordable Healthcare Act (Obamacare) was the first step toward socialized healthcare, where the free market is replaced by government regulations, minimum coverages and paid for by higher taxes. https://careertrend.com/effects-socialized-medicine-doctors-salaries-35046.html

▪ No healthcare money was allocated for the aged

If Obamacare’s major reductions are implemented by Congress over the coming decade, seniors’ ability to access Medicare services will surely diminish. https://www.heritage.org/health-care-reform/report/obamacares-impact-seniors-update

▪ Hitler ordered abortions for all babies born to non-Aryan parents. Over 20,000 babies were killed

Planned Parenthood’s radical atheist founder, Margaret Sanger, describes in her 1922 book, a “how to” approach to abortions based on the same premises espoused by Hitler. http://www.elliswashingtonreport.com/2015/08/08/planned-parenthood-planned-holocaust/

▪ Formation of a Federal Police Force (Gestapo), that watched everyone’s movements and actions, leading to a civilian “informant” network

A Federal police force is unconstitutional yet does exist when applied to the “War on Drugs” 1970’s taskforce. Today, the Patriot Act gives the Federal government “Gestapo” type powers in the name of terrorism. https://www.aclu.org/other/surveillance-under-usapatriot-act

▪ Gun control was strictly enforced, under the guise that children can play with guns. All guns had to be registered. The object was to disarm the public.

There are some 300 meaningful Federal gun laws on the books today, in a desperate attempt to undermine our 2nd amendment right. https://www.cnsnews.com/news/article/how-many-gun-laws-are-there-study-disputes-20000-number

America has been influenced by a socialist agenda for decades, but freedom is a tough cycle to break.

The present Democratic party is in full control of American government. Future congressional leaders like the “Squad” openly push a socialist agenda. Pre-WW2 Germany was also controlled by a small group within its population. Ms. Werthmann’s description of Hitler’s model is eerily similar to today’s America. https://www.instagram.com/tv/CKQBPkdAXJJ/?igshid=ru2c8wcmrjg7

It took under 5 years (1938 – 1943) to convert Austria to full blown Socialism. Austrians had no idea what the consequences of Socialism would be, and I dare say neither will America.

When people fear their government, you have tyranny.  When the government fears the people, you have liberty

If you liked this blog, then you’ll LOVE my books! Click on the image below for 10% OFF ANY BOOK during this WELCOME TO 2021 SALE!