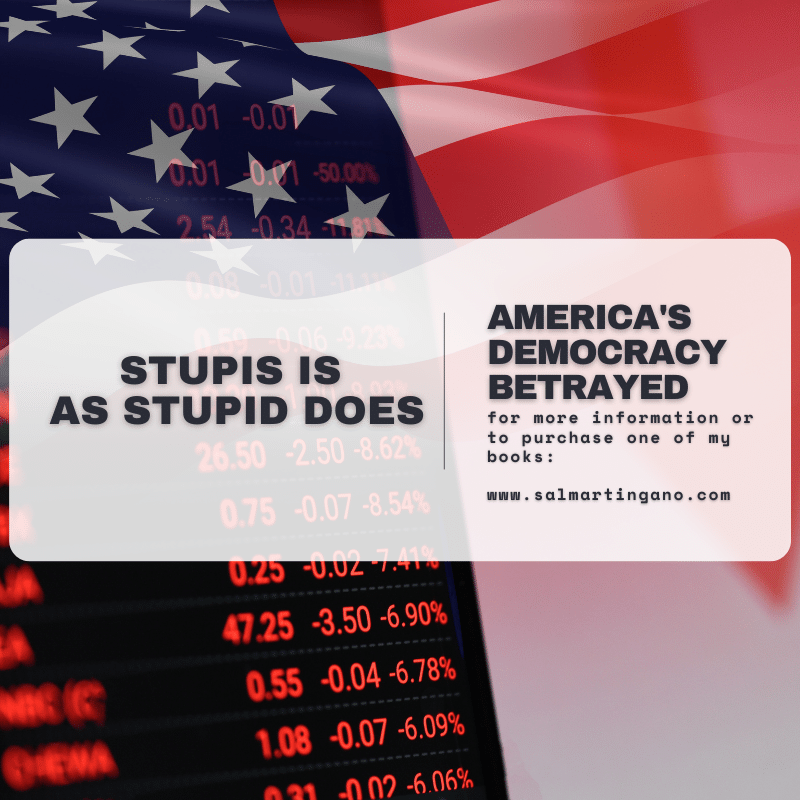 Our society is rapidly becoming a screenplay for the revival of Forrest Gump. We are being exposed to a never-ending display of intentional acts of “Stupid is as Stupid Does”.  I don’t believe it’s a lack of intelligence as it is an act of Constitutional treason.

Article II of the Constitution contains the Presidential Oath of Office: “I do solemnly swear that I will faithfully execute the Office of President of the United States, and will to the best of my ability, preserve, protect and defend the Constitution of the United States.”  It is my observation that the Oath of Office has become more a symbolic gesture for the benefit of political optics than the reality of understanding the requirements and obligations for holding public office.

Let me be blunt, what we are witnessing in today’s America is Constitutional treason.  Our President has all but ignored his constitutional duties to push his liberal (socialist) agenda, destined to destroy American life as we know it.  I shudder at the thought that in my lifetime, American freedom may vanish under the intentional sabotage of our elected officials, who are dependent on the innocence of an unsuspecting citizenry.

Have you noticed that your mailbox is inundated with political candidates asking for donations so they can compete in the 2020 midterm elections?  The law does not consider political campaigning as soliciting, so long as it doesn’t involve asking for money. When did political campaigning become a race for the biggest “war chest”?  Part of the answer lies in the Democratic signature piece of legislation to pass in the House of Representatives; HR-1 “For the People Act”.  The present Democratic-controlled House overwhelmingly passed provisions for publicly financing elections.  Yes, you read this right; using taxpayers’ money to fund political campaigns.  https://www.ifs.org/blog/fact-check-hr1-s1-taxpayer-money-politicians/

The Institute for Free Speech founder and former Federal Exchange Commissioner Chair Bradley A. Smith recently shared his thoughts on the matter: https://www.ifs.org/expert-analysis/senate-rules-and-administration-committee-testimony-s1-2021/

● “Democrats have concluded Americans are stupid. Their massive election takeover bill, HR1/S1, says ‘no taxpayer funds’ will fund political campaigns. Anyone who says otherwise, is ‘lying,’ yet the bill does exactly that; commits millions in taxpayer $$ to campaigns.

Senator Ted Cruz reported in the Washington Times that “the Democratic-sponsored HR-1 legislation would overturn state law, federalize elections, outlaw voter ID, mandate automatic and same-day voter registration without vetting, institute taxpayer financing of federal elections, and virtually ensure Democratic Party control of our politics for the next century.” Cruz also stated, “If it weren’t for the need to fund political campaigns, the money from this dedicated stream would go to fund other taxpayer obligations, so let’s just drop the pretense, shall we?” https://www.washingtontimes.com/news/2021/mar/29/say-no-corrupt-politicians-act

Incredibly, HR-1 implements a 600% match for certain political contributions to congressional and presidential candidates, forcing taxpayers to subsidize political campaigns. EXCUSE ME for thinking, but if voting becomes dependent on which candidate can cash in on the millions of dollars in tax payers contributions for TV and media advertising, it’s only a matter of time before corruption destroys voter integrity.

“Bloomberg” noted that each eligible congressional candidate would qualify for nearly $5 million in federal matching funds under this proposed law. For reference, Rep. Alexandria Ocasio-Cortez, whose race was the second most expensive House race in the country, raised $17.3 million for her 2020 race. Under H.R. 1, she’d be eligible to receive an additional 29% of what she had raised in additional tax payor funds. https://www.atr.org/hr-1-forces-taxpayers-fund-campaigns-they-do-not-support/

There is another factor conveniently not mentioned in the bill. What happens to the unused taxpayer money allotted to political candidates who lose or drop out of their political race? There are federal laws prohibiting the personal use of the money but it’s NOT RETURNED to public treasury. Technically, it can legally sit in a bank account accruing interest for future enrichment, or as Forrest Gump said,  “there’s only so much fortune a man really needs and the rest is just for showing off.”

Inflation and price controls are no stranger to a socialist society. In November 2021, the Biden administration asked the Federal Trade Commission to investigate oil and gas companies for their role in rising prices. Rather than evaluate how government policies and regulations are stifling production and competition, Senator Elizabeth Warren wants government control over ALL economic pricing.  Using the Covid-19 “plandemic” as an excuse for printing fiat money, Warren is counting on the stupidity of people to think you can spend your way out of inflation. https://www.washingtonexaminer.com/opinion/elizabeth-warrens-delusional-antitrust-crusade

Here is how the partial game of STUPIDITY is played:

Here is how the game of STUPIDITY ends:

American sovereignty is lost to The Great Reset

Make no mistake, stupidity has little to do with the potential demise of our country.  Every aspect of every political move, as outrageous as it may seem, is planned.  I take no pleasure in expressing any of the above comments.  As a student of history, we are on the very edge of an intentional bloodless coup d’é·tat.

There is only one way out. Insure 2022 and 2024 voter integrity at all costs to regain control.