Greta Thunberg, Al Gore, and The Noble Cause Corruption Model 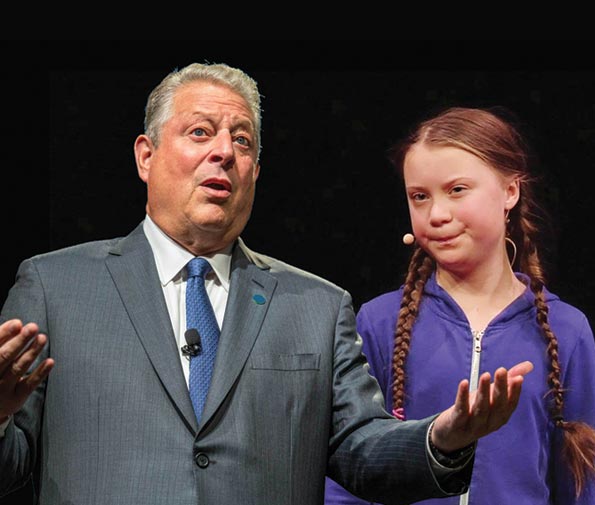 Read below and see what YOU think…

Al Gore told us in his documentary “An Inconvenient Truth” that “The Science on Global Warming is Settled”. Without any scientific credentials or evidence, Gore took one microscopic part of the million(s) years of our planet’s climate history and made it a “doomsday” scenario for the uninformed. Gore made ample use of unprovable hypotheses charged with a good deal of emotion and sold it to the world as evidence that humanity is the sole cause of global warming.

Now, some 12 years later, absolutely NONE of Gore’s 10 predictions like; rising sea levels, a new ice age for Europe, extinction of Polar Bears, etc, have occurred. So what science exactly was Gore referring to?

Below are just a few of the lies/hypocrisy that Al Gore has pushed out to the uninformed public:

With the climate debate still front and center, enter Time Magazine’s person of the year for 2019; Greta Thunberg.  Who better than a finger-waving 16 year old girl, absent of any major accomplishments or comprehension of history, science or economics, to be “person of the year”? Greta is the climate activist’s dream. After all, she speaks with unwavering authority, and is emotional and indignant- yet shielded from any adult critical analysis or debate.

In a recent article by the New York Post, Thunberg took a page out of Al Gore’s misinformation playbook by tweeting a picture of herself sitting amid bags and suitcases on what she called “overcrowded trains through Germany”. It turns out she had a first class seat the entire time. Yet, if anyone were to question her, they’re met with: “How dare you attack a poor defenseless teenager who suffers from Asperger Syndrome”. Well I say shame on her activist handler for manipulating and hiding behind the innocence of youth.

Maybe Greta and her puppeteers should confront an actual climate scientist and listen, then take that knowledge to direct her emotional speeches towards the hypocrisy of Al Gore.

How About Facts from an Actual Climate Scientist – Like Patrick Moore?

“There is no definitive scientific proof through real-world observation that carbon dioxide is responsible for any of the slight warming of global climate which has occurred during the past 300 years.” I reject that “the science is settled” and that “the debate is over.”

Ever Heard Facts from a REAL Climatologist – like Patrick J. Michaels?

*** Those who question the climate consensus are CENSORED or PUNISHED by EPA regulations. ***

It’s easy to go on a “How Dare You” rampage, talking to the choir.  As an adult you might find your opposition not so forgiving.

So, What’s the Conclusion?

Yes, the earth is slowly warming, but climate history evolves over time. It’s an insult for anyone to put actual dates on upcoming catastrophic events when the best scientific climate minds in the world freely admit they don’t really know when climate patterns will change… other than “they surely will.”

Those with vested interests in the business of climate change utilize the Noble Cause Corruption Model: what they want people to believe, while conveniently not looking at the actual reality models.

Gore, and now Thunberg are being used as political props to rally the uninformed under the Noble Cause Corruption Model. Gore has made a fortune as the global warming guru, while Greta is shamefully robbed of her childhood to push a victimhood mentality awareness.

A more in depth understanding about the history and lessons learned from Climate Change and Noble Cause Corruption is contained in my newly-released book: