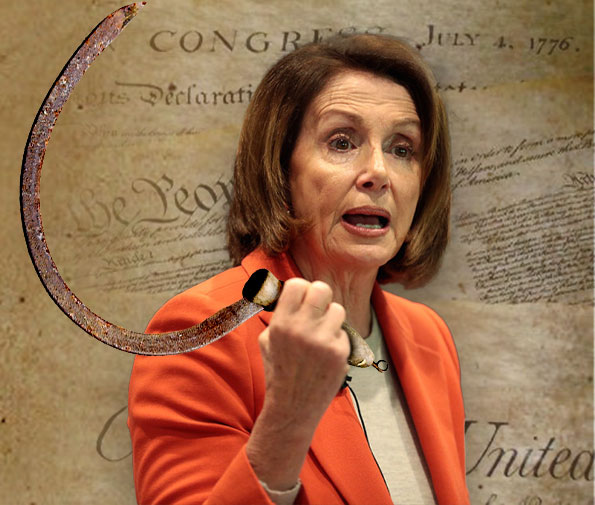 We are at the point where our country is in danger of collapse from within. On a daily basis, we are being treated to one destructive piece of proposed legislation after another, each violating the basic premises of our constitutional republic. The reason is simple: our federal government has been slowly infiltrated with “duly elected” representatives espousing a socialist ideology intended to appeal to the masses of uninformed citizens trusting in the socialist agenda of “Over Promising and Under Delivering.”

Below is a summary of some points in this legislation that you will clearly recognize do everything possible to make election fraud PERMANENT:

In typical Pelosi style, she is pushing this bill as fast as she did The Affordable Care Act . . . before too many people have access to its contents.

Remember Pelosi’s famous quote: “You have to pass The Affordable Care Act in order to read it.”

For every $200 a person donates toward their candidate, the federal government will pay    $1,200 (of taxpayer’s money) to a general campaign fund to support a candidate of THE GOVERNMENTS CHOICE.

It is my opinion, as is with other constitutionally minded citizens, that if H.R. 1 passes into law, our Democratic (representative) Republic is irreparably compromised. This bill effectively would shut down any campaign attempting to observe a constitutionally directed election of conservative minded candidates.

What this bill will do is radicalize our country as far left as possible, using constitutional language to placate the uninformed.

Our election cycles are the basis of democratic rule. Representatives must earn their right to retain positions in government. Government positions were NEVER meant to be lifetime occupations or controlled by one political ideology. Democracy is diluted when government becomes the decision maker. So, let’s call it what it is, we are looking SOCIALISM in the face.

In Socialist countries, freedom is what the government allows it to be. The way to infiltrate a country’s democracy is to allow the government to vote itself laws and benefits on the backs of an unwitting population. Over time, individual freedoms are compromised or outright taken away, for the benefit for society as a whole (of course). When a crisis strikes, whether real or contrived, like the World Trade Center bombing or the created COVID-19 world pandemic (covered thoroughly in previous blogs), freedoms are compromised or lost forever.

In the U.S., our freedoms come from God not government; that’s why they are inalienable and prominently stated in our constitution and Bill of Rights. Our present Democratic party is attempting to destroy the very “foundings” of our country and can only succeed with the ignorance of the electorate.

If you feel it’s OK for government to censor our FREE SPEECH using the influence of BIG TECH, or remove our ability to protect ourselves under the 2nd amendment, I suggest you MOVE . . . NOW.  This is not a personal attack, this is a long-awaited wake-up call to resist the trappings of socialism, where freedom is what government says it is.

If you liked this blog, then you’ll LOVE my books! Click on the image below for 10% OFF ANY BOOK during this WELCOME TO 2021 SALE!