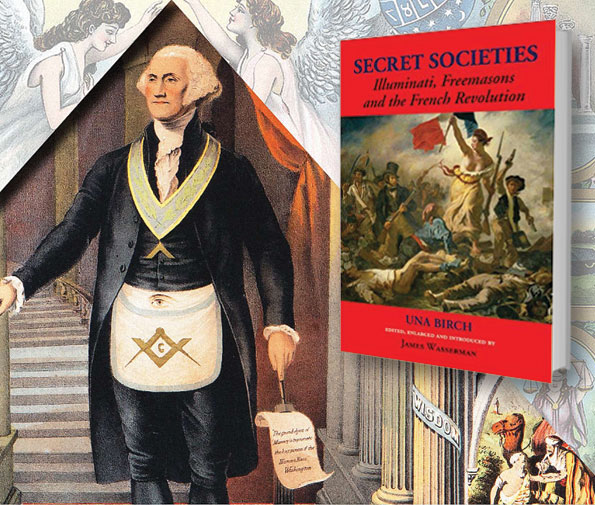 Truth be told, secret societies comprise a selective membership of individuals with specific rituals and agendas. Memberships are never revealed but in retrospect nearly half of all American Presidents were members of secret societies like the Freemasons or Skull & Bones. Secret societies have also influenced world events and were often responsible for protecting ‘human’ rights from corrupt governments or countries, as is the case for the French Revolution.

In the book “Secret Societies: Illuminati, Freemasons, and the French Revolution”, author Una Birch gives an in depth look into secret societies- that takes us into the mindset and the day to day experiences of 18thcentury France during the time of the French Revolution. Ms. Birch, an English historian, writes about this specific period, 100 years after the French Revolution. Secret societies, like the Illuminati and the Freemasons gained prominence, during this period extensively, to rid the French population from the suppression of despots, Kings and Monarchs. These secret societies were formed at various times during history by powerful influential members of society, educators, and philosophers- that came together in this case, to stop oppression and make France a free society.

The French Revolution took place from 1789 to 1799, a time when human rights were controlled by a dictator, a King or a religion. Ms. Birch goes into great detail about Freemasons because they have often been accused of supporting revolution, one world government, and other nefarious activities while the Illuminati were a driving force to break the strangle hold the Catholic religion had over the European population. Both secret societies were instrumental in gaining the support of the people to rebel against the French aristocracy, eventually planting the seeds of ‘collectivism’.

Ms. Birch is careful to point out that with the intervention of ‘secret societies’, especially the Illuminati, freeing the French people from tyrants like King Louis XV1, stopped the atrocities… but the French people simply traded one oppression (dictatorship) for another (collectivism). Collectivism is an idea where individual rights are granted and sometimes sacrificed for the goals of the groups “greater good”. Collectivism gives the illusion of individual freedom; that is, until those rights are taken away.

The French Revolution stood for Liberty, Fraternity and Equality, but Ms. Birch also detailed the failures of these ‘secret societies’ in the French Revolution. The rebellions’ goal was to end the ‘absolute’ monarchy of Louis the XVI (executed in 1793) and establish a “constitutional’’ or “representative” type government- but instead ended in the military dictatorship of Napoleon Bonaparte.

In “Secret Societies: Illuminati, Freemasons, and the French Revolution”, Ms. Birch details the connection between the Illuminati’s influence in the French Revolution resulting in the seeds of ‘collectivism’, to that of the Freemasons’ influence in the American Revolution (1765 to 1783) with its seeds of ‘individualism’. ‘Individualism’ by contrast, states that people have ‘inalienable rights’ not given or taken away by a government.

So, What Message does the Impact of these Secret Societies Have for the Modern World?

The impact of the secret societies on the French Revolution and the American Revolution is felt to this day in modern politics around the world. Today however, ‘Socialism’ and ‘Progressivism’ have become the modern version of ‘Collectivism’. ‘Conservatism’ and a ‘Representative Republic’ is the modern version of ‘Individualism’. Without understanding history or its relevant terminology, there will always be another revolution waiting its turn.

The book ‘Secret Societies:Illuminati, Freemasons, and the French Revolution’ is a well balanced, documented, factual adventure into history and its relevance to modern politics. The book is an important read for our younger generations because it gives insight into WHY the U.S. Constitution and Bill of Rights were written the way they are.

“Congress shall make no law…,” is our protection against tyranny.