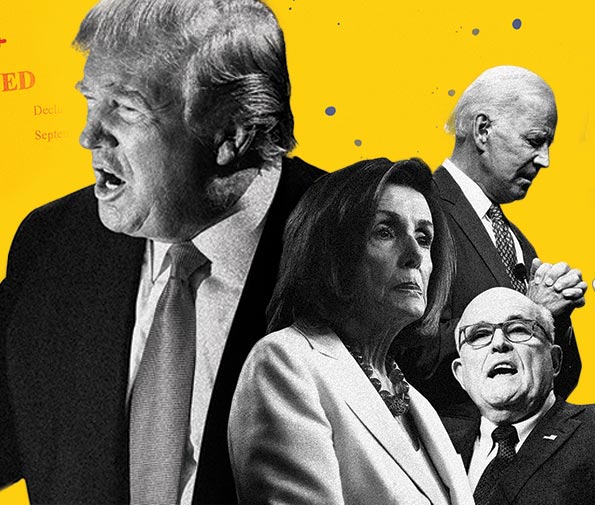 *** Our country is “hot and heavy” about our present Impeachment proceedings, but few of us really understand the BIGGER picture. This is not about what Trump did, this is about what Trump represents. ***

America is polarized by relentless banter on radio, TV, and the internet. Mainstream media allows “talking heads” to make their case for/against impeachment by repeating the same words and phrases approved by their “corporate” bosses. It’s like watching a movie in fast motion where no one can really follow the storyline. It’s not only maddening, it’s intentional.

Information overload is the perfect tool for creating followers, instead of thinkers. When people aren’t willing to listen, discussion stops, and sides are chosen. Less citizen participation means politicians get their way. The only recourse is to understand the system. After all, IT’S YOUR SYSTEM!!

A Brief Refresher on the U.S. Governmental System

Remember, The United States is a Republic, NOT a Democracy

Our government was set up by the people to protect their rights as individuals and to keep order. Our Constitution represents a Democratic Republic (3 branches of government with distinctly different powers and objectives). We are NOT a Democracy (majority rule), we are a Democratic Republic of elected officials that represent the people by population (House of Representatives) and by individual states (The Senate).

The United States has Three Branches of Government

The 3 branches of government (legislative, executive and judicial) consist of elected representatives from our two main political parties (Republican and Democrat) with differing viewpoints. Political parties from each branch of government are meant to bicker (differing viewpoints) and eventually come to a decision (our voting process). The result of their decisions is accepted and enforced (by congress) as the will of the people.

WHAT EXACTLY DO THESE GOVERNMENT BRANCHES DO?

OK… NOW WE CAN PUT THE PIECES TOGETHER

According to the U.S. Constitution, the House of Representatives has the sole “investigative” power to impeach any government official. The Senate has the sole “legal” authority to conduct a trial of an impeachment case and remove a president from office. The division of power guards against potential abuse of the impeachment process. To impeach a U.S. President, the reason must be for treason, bribery, or other high crimes and misdemeanors.

THE NUMBER OF BOGUS AND FAILED ATTEMPTS TO REMOVE PRESIDENT TRUMP FROM OFFICE HAS BEEN NOTHING SHORT OF MIND-BOGGLING:

There is a lot of rhetoric but no crimes committed– certainly not a sound basis for Impeachment.

Liberals are Motivated by Hatred of Trump, Rather Than Concern for Potential Wrongdoing

We are presently witnessing the very worst of politics where the motivation is HATE not wrongdoing.  Trump was impeached by the House of Representatives. The new game is withholding the impeachment bill from the Senate until the democrats get assurances of fairness from the Senate. The impeachment IS NOT a political trial, it’s a legal trial with NO CRIME.

As mentioned, this impeachment is not about what Trump did, it’s about what Trump represents. Trump is an unfortunate bleep in the political “swamp”. Politics today are dependent on liberal thinking. Trump is a conservative and has no ties to “career politicians”.

The political make-up of the Supreme Court is crucial.  Nine Supreme Court justices (judges) are nominated by the president and confirmed by the Senate. Before Trump, there were 6 liberal judges and 3 conservative judges.

The Importance of Ruth Bader Ginsberg in the Supreme Court

The liberal democrats want Trump removed from office before liberal justice Ruth Bader Ginsberg’s eminent retirement or death. Trump is successful on all domestic polls, and will probably be re-elected, despite all the democratic bluster and media support. Impeachment is their only option.

The Impeachment of Donald Trump is a stain on American politics.  The Impeachment charade is to hide true motives of an out of control democratic party.  Democrats can pervert our Constitution and Impeachment process all they want. However, thanks to the genius of our founding fathers, the “ballot box” is still the ultimate Supreme court equalizer.

President Trump’s re-election represents a possible further conservative majority in the Supreme Court, a threat to the liberal establishment; i.e., “the swamp.” The Impeachment of Donald Trump, without a crime, is an arrogant childish insult, reminiscent of a magician’s ability to make you see what is not there.  Unfortunately, this is not a circus act and hopefully a majority of the American voters will not be laughing entering the November election.

A more in depth understanding about the history and lessons learned from our government’s role in Impeachment is contained in my newly-released book: