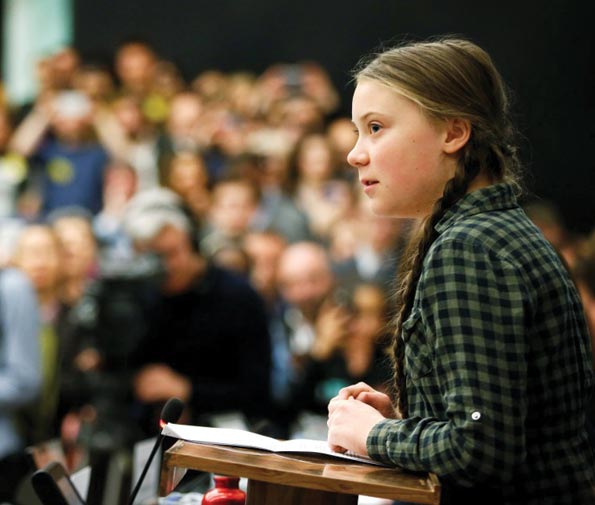 “Give me four years to teach the children and the seed I have sown will never be uprooted.”

“He alone, who owns the youth, gains the future.”

Perspective is a great teacher that can be a valuable tool in understanding the liberal (socialist) mindset of today’s Democratic leaders. Using climate change (in this case) to invoke FEAR into the minds of the ‘uninformed’ youth is a Marxist/Communist technique used by tyrants and dictators as a rallying call to separate children from parental influence, eventually forcing them into compliance.

Today’s political rhetoric has turned to shaming ‘non-believers’ of climate change, as if it were a religion. One must pay close attention to detail to understand the final agenda.

* This is not the forum for discussion of the present political ideology of climate change but seeking actual scientific facts rather than contrived computer models would be a necessary starting point.*

Climate change has less to do with banning plastic straws or somehow reducing cow flatulence to save our planet as it does in creating a political agenda requiring crisis mentality within our youth.

The man-made global warming rhetoric has slowly but intentionally morphed into Climate Change, which now makes nature itself the primary enemy, enhanced by man’s disrespect for our planet. The impending climate change frenzy is designed to evoke emotional FEAR within impressionable children.  Emotions rather than fact becomes a potent motivator.

Without parental knowledge or permission, schools across the country have adopted Environmental Literacy Programs as part of their student’s education, required for graduation.  Students must show their active support for the climate change movement, using FEAR as motivation. To graduate, a student must pass ‘an environmental competency test’. (Can you say indoctrination?)
https://www.educationviews.org/stop-political-indoctrination-americas-children/

On Sept 17, 2019, over 1.1 million NYC students were given permission to skip school and join in and be part of the “Fridays for Future” campaign, in response to political leaders taking urgent action to address climate change.  History is replete with socialist/communist examples of isolating and indoctrinating the youth to weaken any future resistance, leading to compliance.

*** WARNING: what you are about to read can be disturbing. You decide! ***

Under the Guise of “Environmentalism”
Students are learning New Words:

Ecosocialism has nothing to do with climate change but everything to do with the Green Party Movement that mirrors the existing socialist definitions of Ecology, consistent with those associated with Marxism.

Environmental Racism is the term used to describe when environmental injustices are unequally distributed and unfairly fall on one or more race, ethnic group, or minority. (Huhh?!… How does the environment discriminate or prejudice a race?)

Social Justice is an environmentalist term to achieve the equality of distribution of goods and wealth. (This matches the classic definition of a communist government)

Students are being Taught
to be Social Justice Activists

*EXCUSE ME* but what happened to the teaching of American Government and Constitutional principles? Silencing the children from inquiry or debate on environmentalism obliterates their constitutional right to free speech or thought.

Children don’t understand the value of freedom, what makes a society work or not work, or how governments operate but they do understand FEAR as in a dying planet, global catastrophe, and mass extinction.

* So,it’s OK for unaccompanied school children to march in a climate protest organized by politically biased leaders but it violates ‘politically neutral learning environment’ policies for teachers to do the same?!

The decision to bar teachers underlines the hypocrisy involved in separating the ‘politics of climate change from ‘science of climate change”. This is a stretch even for liberal-leaning New York, since teachers MUST bring politically acceptable biased climate change issues into the classroom.

Climate change has become weaponized by the environmental movement, convincing people that humanity is the cause of changing climate. The reality is our climate always is and will forever be changing, just as ‘aging’ always occurs regardless of human intervention.

Computer science has “humanized” climate change, by creating believable models void of frank scientific evidence.  Do we have computer models that weaponize aging as an “existential” crisis as we have for climate change?  Do we have political parties eager to be the first to impose restrictions on humanity to combat aging; after all it’s humanity that causes aging!

A more in depth understanding about Global Warming and Environmentalism is contained in my newly-released book: